Paddle boarding, camping, eating freeze-dried meals, filming, interviewing — all this was to be expected, said Wright. But how these events would play out each day were unknown, and that was especially exciting, Yahanda added.

So, too, was the purpose of their trek. Huber, Wright and Yahanda are telling the Great Lakes’ story through a film, Troubled Water, of which the Michigan Environmental Council is a fiscal sponsor.

It will highlight the greatest dangers the Great Lakes face: the Line 5 oil pipeline, climate change, invasive species and algal blooms. And it will be told by people who love the lakes: anglers, vacationers, local residents, scientists, business owners, grassroots advocates and, of course, paddle boarders.

"It's a story of hope that we want others to follow," Wright said. "If this were to happen in other places, we want them to prioritize what they love – the land they love, the water they enjoy – over infrastructure that will harm it." 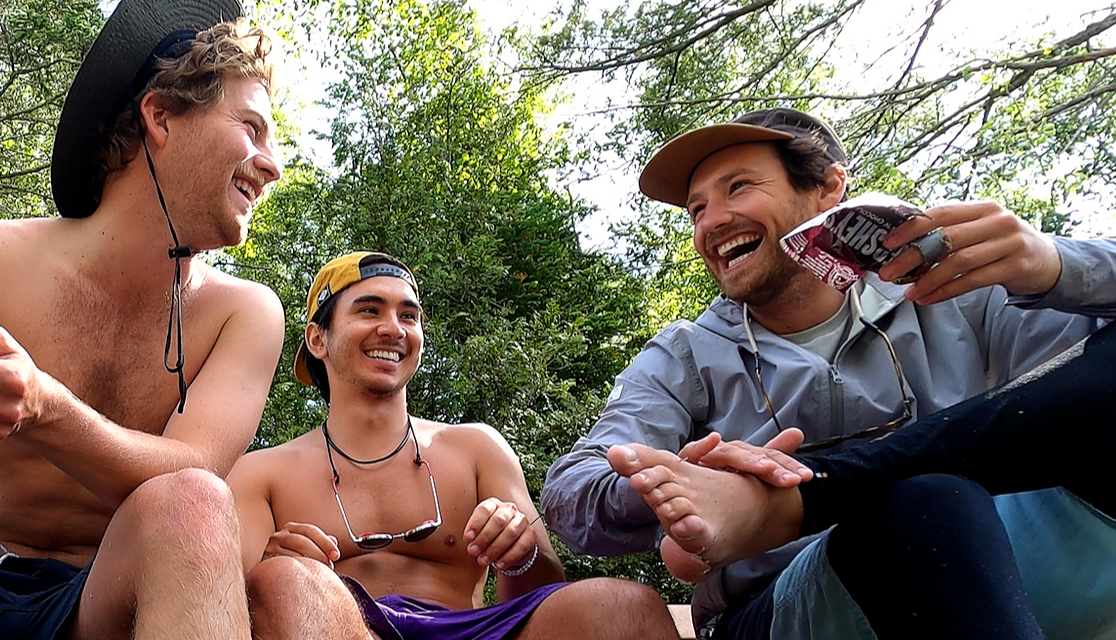 Troubled Water surfaced with a text, but its depths are away from the lakes in Fort Wayne, Indiana. It's where Huber, Wright and Yahanda grew up and where they became friends.

Every summer, Wright and Yahanda would take long vacations in Michigan, where their love for paddleboarding grew. Huber would sometimes tag along, carrying with him dreams of being a veterinarian.

The friends grew up and moved away, but they kept coming back up to Michigan's north.

They got that text last year. They were in Michigan, paddling from Lake Walloon to Elk Rapids. Huber was casually filming.

It was an alert from the grassroots, anti-oil spill group Oil & Water Don't Mix, which the Michigan Environmental Council co-steers. It said Gov. Gretchen Whitmer had ordered Line 5 to be shut down. She found its company, Enbridge, had violated the easement that made its pipeline's existence in the Great Lakes possible.

It was wonderful news to all three friends. Although Wright and Yahanda had been part of Oil & Water Don't Mix for years, that alert got them thinking about how they might best help the cause.

"That's where we thought, 'Paddling is something we could do,'" Wright said, on behalf of Yahanda. "It's something we really enjoy, something we do for hundreds of hours anyways…. We can grab people's attention while telling an incredible story of the cumulative impact on the Great Lakes."

The framework for Troubled Water came to be. Huber, who was not as familiar with the Great Lakes and its threats, liked the idea, too.

"Oil pipelines are very threatening throughout the world, and this is one that doesn't get as much attention nationally," said Huber. "When I found out how threatening [Line 5] was and how impactful it could be when it ruptured on the Great Lakes, I was on board."

On board, figuratively, not literally. Davis would man the cameras, microphones and other filming equipment, filming his paddleboarding friends and the people they met along the way. Yahanda and Wright would moonlight as producers.

It was a new space for Wright and Yahanda, both accountants, and the first full-length film Huber, an award-winning photographer, would take on. 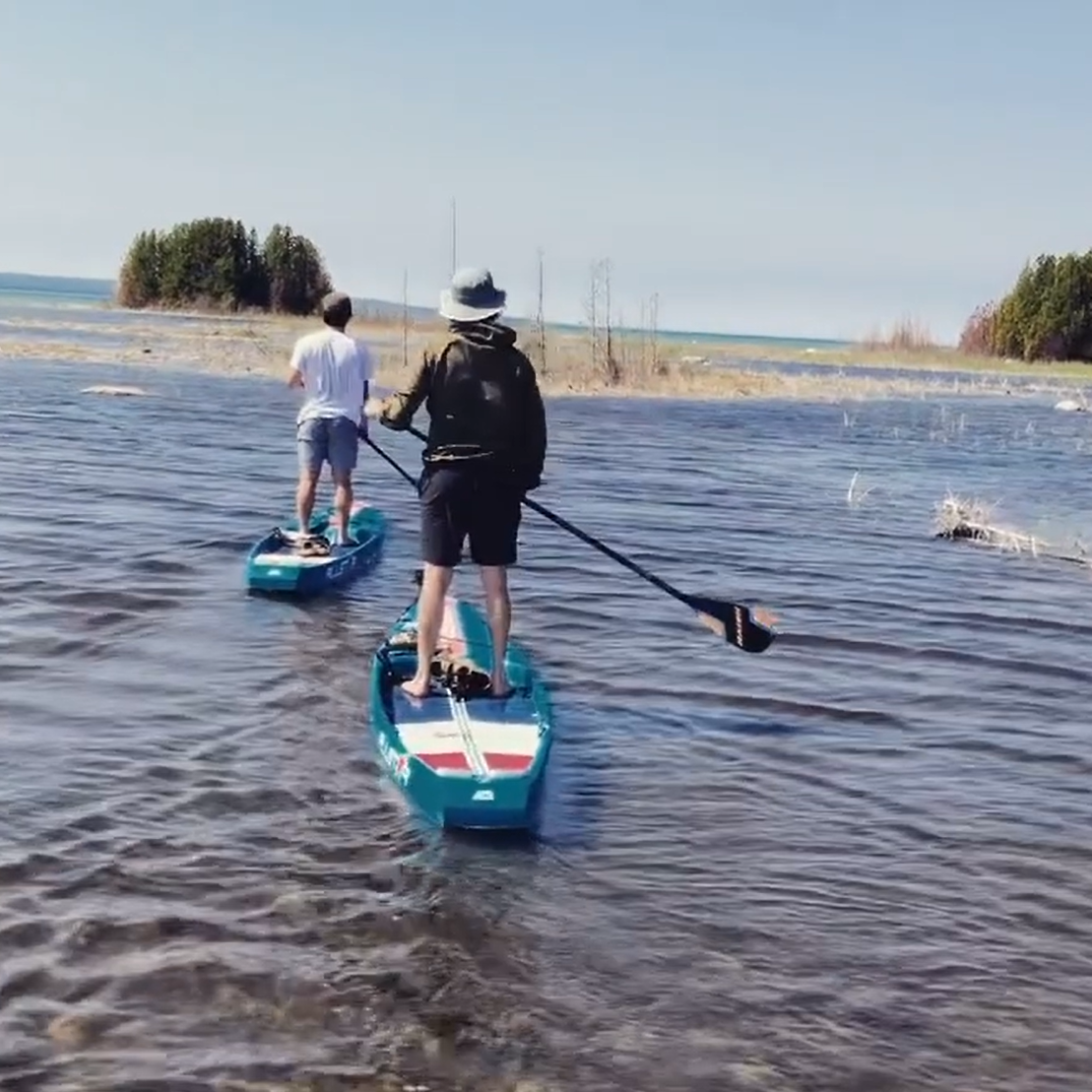 "We may be flying by the seat of our pants a bit, but if we know to do anything it's talk about Northern Michigan," said Yahanda.

Among those they might on the way from Mackinac to Lansing: Vacationers and anglers worried about algal blooms killing their fun; lakeshore residents and scientists concerned about the high waters climate change brought up; and business owners and tribal members fearing the decimation an oil spill could bring. Huber, Wright and Yahanda would share their own stories, too, as diehard tourists, water sport enthusiasts and artists.

"These are all big, complicated issues, and they all affect a big, complex group of people," Yahanda said.

The common vein between all the potential interviewees was the Great Lakes, yes, but also the deep love for a place and the wanting to protect it. That, they said, was universal.

Huber saw these common feelings as an opportunity to instill hope in viewers and as inspiration to fight for the places they loved, Great Lakes or otherwise. If the people of Michigan could do it, anyone could.

"It's like a David and Goliath story, where these young, grassroots movements are trying to battle a massive, international corporation to get a pipeline out," Huber said. "I think for anyone to believe they can make a difference, you are innately optimistic."

Fans can watch Troubled Water's journey from the Mackinac Bridge to Lansing and beyond at troubledwaterfilm.com.

Also present on the site is a link to donate to the film to help fund trip essentials, equipment, post production and the paychecks of the people behind it all. All donations are tax deductible thanks to the fiscal sponsorships of Michigan Environmental Council and Oil & Water Don't Mix fiscal sponsorship.

To stay up-to-date on Line 5 work, sign up for the emails of the Michigan Environmental Council and Oil & Water Don't Mix.