The Senate Energy and Technology Committee continues to deliberate on a package of bills that lay out a misguided approach to Michigan's energy future-one that would suspend Michigan's transition to cleaner energy sources, lead to major rate increases for Michigan families and throw a wrench in economic development in our state.

During three weeks of hearings on the bills last summer, strong opposition from MEC and many other groups made it clear that Senate Bills 437 and 438, as introduced, did not have the support to move forward. Bill sponsors Sens. Mike Nofs and John Proos went back to the drawing board, and introduced substitute versions of the bills in late April.

Nofs, who chairs the committee, recently announced he had the votes lined up, but he now appears to again be working on new drafts. Such a broad range of groups have voiced opposition-environmental groups, energy efficiency contractors, major corporations (including Steelcase, Whirlpool, Johnson Controls and others) and even the conservative group Americans for Prosperity-that it's hard to imagine the bills moving out of committee without significant revisions. Similar bills cleared a House committee last fall but have languished on the House floor.

Throughout this process, the issue of "electric choice" has been a major point of debate. (The term refers to the 10 percent of the state's electric load allowed to come from alternative electric suppliers, rather than from utilities.) That small slice of the energy pie has dominated much of the discussion and disagreement between major industrial facilities and the utilities.

While energy choice is an important issue, the debate should not lose sight of the other 90 percent of our energy. The focus there should be on answering three basic questions: How do we generate electricity? Who gets to generate it? And how much should we generate?

How do we generate it?

The case for making renewable energy Michigan's go-to source of electricity is growing stronger all the time. For example:

Even setting aside jobs and investment-and the huge cost savings from the avoided health impacts of air pollution-it's clear that renewable energy sources offer the best bang for the buck. And yet, the current legislation proposes eliminating the state's renewable energy standard.

Michigan's electric utilities and supportive legislators have often claimed we don't need a renewable energy standard, like the current one which required them to generate 10 percent of their electricity from renewable sources. The companies say they'll invest in more renewable sources as costs come down. So, with wind and solar at record-low prices, the utilities must be buying up clean power like crazy, right?

Wrong. DTE Energy has told shareholders it will develop 100 megawatts of wind power in 2019, but that will result in a minuscule .2 percent increase in renewable energy per year. Similarly, Consumers Energy's plans for three new, 100-megawatt wind farms over the next decade will only increase its renewable portfolio by .25 percent annually (in contrast to the nearly 1.5 percent per year they built to reach the 10 percent renewable standard).

That's why MEC and a growing portion of the business sector are advocating for including language in the legislation to set a clear expectation that utilities will continue to transition to clean energy sources. We have proposed language clarifying that, if renewable energy prices exceed the cost of building and operating new natural gas combined-cycle power plants, the utility's obligation to invest in renewables would cease. MEC is encouraging legislators to approve the next phase of clean energy by increasing our current 10 percent standard by 1.5 percent each year from 2017 through 2022.

An increased commitment to renewables will protect the health of Michigan families, avoid the unpredictable price spikes that come with natural gas and encourage further economic development and investment in the state.

Who gets to generate it?

With renewable sources now providing the cheapest electricity on the market, why aren't utilities buying all the wind and solar power they can get their hands on? The simple answer is that building and operating big power plants is the way they have always done it and change is not easy. Unfortunately, that inertia is reinforced by a business model that rewards them when they build things-and the bigger the thing, the more money they make.

So, one important debate has centered around who should build and operate large power plants to supply our power. Currently, we have a mix of utility-owned power plants and what are known as merchant power plants that are owned by private developers and sell electricity to our utilities and alternative electric suppliers.

Utilities prefer to generate electricity themselves because they are guaranteed a profit of over 10 percent on their power plants and capital used to serve Michigan customers. However, they do not make a profit when they buy power from other suppliers. The current bills allow utilities to make profits on power generated by other suppliers, which would drive up costs.

Rather than guaranteeing utilities profits on power they don't produce, MEC and other ratepayer advocates argue that Michigan should use a competitive bidding process to determine who generates our electricity. While our major utilities enjoy a near-monopoly on energy distribution in Michigan, there is no legal basis for them to also monopolize energy production. If utilities want to produce electricity for Michigan customers, they should have to demonstrate they have the best deal for Michigan ratepayers. And given the record low current prices for renewable energy, we believe a competitive bidding process would lead to greater investment in wind and solar.

Another major policy change being proposed focuses on the role property owners can play in meeting energy demand. There are more than 1,800 participants in Michigan's net metering program, which allows customers with solar panels (or small wind turbines) on their property to see their monthly electric bills reduced to reflect the amount of electricity they generate. Up to now, these customers basically have been allowed to spin their meters backward. Net metering helps reduce pollution and maintain grid reliability, and the small-scale projects it supports create more jobs per unit of electricity than any other energy source in Michigan. 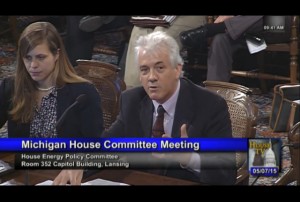 Despite the benefits of net metering, the current legislation would undermine the program by forcing participants to buy all of their power from their utility at a retail rate and sell back what they produce at the much lower wholesale rate. If passed as written, the legislation would probably drive solar installers out of business and discourage homeowners from creating their own power. Rather than gutting net metering, MEC is calling on lawmakers to support this beneficial program by leaving the current pricing scheme in place and allowing more customers to join in.

How much should we generate?

For our pocketbooks and for the planet, Michigan's energy policy should include strong measures to reduce electricity demand. Between 2009 and 2014, energy efficiency programs helped Michigan customers avoid the use of more than 6 million megawatt hours of electricity. The programs save Michiganders $4 for every dollar invested, a total savings of more than $100 million every year.

Unfortunately, utilities have a built-in financial incentive not to reduce demand, but to build more power plants so that they can earn more profit. That's one reason the current legislation would eliminate the state's energy efficiency standard. MEC is urging lawmakers to save money for Michigan families and businesses by preserving our common-sense energy efficiency measures.

Also, using electric rate design to reduce peak demand is an area of energy efficiency with huge untapped potential in Michigan. Fifteen percent of Michigan's energy capacity sits idle for 99 percent of the year, and is only required on a few hot summer days when demand is at its yearly peak. On top of that, federal regulations require the utilities to have additional capacity-equal to 15 percent of Michigan's peak load-on standby to prevent blackouts in an emergency. If we can shave enough off of peak demand on the hottest summer days, we can eliminate the need for those rarely used power plants, saving Michigan customers significant money.

Our two biggest utilities have already spent $1.1 billion to install smart meters that provide the power company and its customers with real-time information and greater details on energy use, which can be useful in reducing home energy consumption. Studies by DTE Energy and Consumers Energy showed smart meters could be used to create $500 million in energy savings.

However, those savings won't materialize until our electric rates are as smart as the meters. MEC is calling on lawmakers to require that utilities use demand-response programs that adjust electricity rates as demand rises and falls. These programs might, for instance, alert customers that rates will increase temporarily on a hot summer day, which could convince them to run their dishwasher at night, or turn off the air conditioning while they're at work and demand is highest. In pilot studies, utilities have demonstrated they could slash peak demand in Michigan homes by 40 percent simply by employing time-of-day pricing.

As discussion continues in Lansing about Michigan's energy future, MEC will continue doing all we can to achieve a policy outcome that protects public health and the environment, ensures affordability, maintains reliability and protects families and businesses from price spikes.

We'll keep you updated as these debates continue. Meanwhile, we encourage you to let your elected officials know you support legislation that sets clear standards for renewable energy and energy efficiency, and holds our utilities accountable to do what's right for their customers.