Crafting a 30-year strategy to position Michigan's abundant (and awesome) water assets in a national and global context is no easy feat. MEC is grateful to Governor Snyder for asking for such a plan, and to Jon Allan and his team at the Office of Great Lakes (OGL) for pulling a laudable draft of one together.

More discussion of the water strategy is below, but first, here are the top ten surprises I found in digging through the document. Take a look for yourself, and see what surprises you!

These facts, surprising and challenging and eye-catching as they may be, aren't really the best part of the new water strategy. And despite the draft's hefty 60-plus recommendations, it won't satisfy any group or individual focused narrowly on a single issue of water policy, whether it's pipeline safety or climate change or agricultural runoff or water shutoffs in Detroit. It's not perfect by any means (though luckily, there's still time to put in your comments on the draft to make it better).* 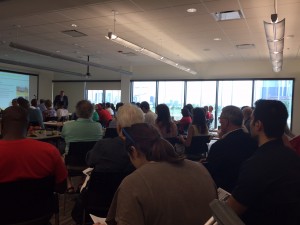 But to my mind, that's not really the point, either. Last week, as I worked with our partners at the Erb Family Foundation, the Alliance for the Great Lakes and the Sierra Club to help the OGL host a successful community conversation on the draft water strategy in Detroit, it became clear to me why the draft-even if not perfect-is such a significant undertaking and important accomplishment.

More than 75 people came to the meeting, hosted at the new DNR Outdoor Adventure Center on the Detroit Riverfront near Milliken State Park and Harbor. They included passionate water justice advocates-understandably angry over water shutoffs in the city-and college professors with blueprints in hand for creating more surface water infiltration through expanded green infrastructure.

The wide-ranging discussion that ensued-likely mirrored in the OGL's other stops around the state this summer-didn't achieve consensus on any single, overarching water challenge or opportunity. Instead, it accomplished something perhaps more important: It highlighted the pervasive role of water in this state. It's what we drink, it's where we play, it's who we are.

It is Michigan's one common, irreplaceable and unequivocal asset, universally loved and deeply valued from bustling city street to sandy shoreline dune, from riffled river bend to rain-soaked farm field. And thus, the strategy offers not a single silver bullet to fix Michigan's water woes, but a catalog of issues and a framework for rethinking not just the water itself, but our individual and collective responsibilities and relationship to it.

So watch as wildfires ravage drought-stricken California and the rapid depletion of the massive Ogallala Aquifer jeopardizes the High Plains bread basket, and be grateful to be living in the Great Lake State, and to have the chance to argue, plan, study and steward this rich gift of ours. Pick up the water strategy and start reading.

*Send your comments on the water strategy to [email protected]; mail them to Office of the Great Lakes, DEQ, P.O. Box 30473-7973, Lansing, Michigan 48909; or share them at the final community conversation on Aug. 13 at 7 p.m. at the Eberhard Center at Grand Valley State University.