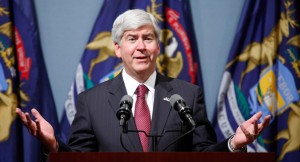 Governor Rick Snyder's fourth State of the State speech Thursday lasted just over an hour. The first two-thirds highlighted what he saw as his accomplishments, leaving only the last third of his time to discuss future initiatives. In those few minutes, Gov. Snyder made disappointingly sparse mention of the "Pure Michigan" natural resource and public health issues that are so critical to our quality of life.

1. Snyder vowed stronger action on combating invasive species, promising money in his proposed budget for same. That's good. Michigan needs to continue to pressure Washington to protect the great lakes. Michigan also needs strong stewardship of the biodiversity that protects our natural assets from invaders. He cited both aquatic and terrestrial invasive species, which is important. Everyone has seen the loathsome Asian carp. But land-based species like the Asian longhorned beetle, which has an appetite for maple and hardwood trees, puts a huge portion of our forests at risk.

2. He applauded the restructuring of Michigan's hunting and fishing license fees. The fees were increased for the first time in decades and simplified. MEC supported the changes. The bill raises about $20 million for natural resource conservation and management by increasing fees for hunting and fishing licenses. The money will help hires dozens more conservation officers, increasing protection for Michigan's splendid flora and fauna.

What we had hoped to hear more on:

1. Following a year of public dialogue on energy - which the governor himself initiated - he made only the briefest mention that the discussion would go forward in 2014 and possibly 2015. The state's hugely successful energy efficiency initiative and renewable energy standard plateaus in 2015. The lack of urgency in the governor's address was discouraging. Michigan needs to keep the momentum moving forward. Delay in setting new goals for energy efficiency and renewable energy will potentially cost our state a loss of jobs and much needed investment in our economy.

2. He cited progress, but a lack of "comprehensive reform" to our transportation funding system. He might have been more expansive in reiterating his call for a truly connected transportation system that includes buses, trains, trails and other non-motor vehicle options. Since he has been a leader on public transportation, so we're not overly concerned with that omission.

3. He suggested that "metal recycling" would be a priority this year, but offered no details. He's previously called for significant improvements to Michigan's abysmal recycling rate. We look forward to hearing more about metal recycling and how it might fit in to a comprehensive plan.