Remembering an icon of environmental law 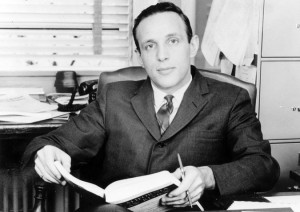 While we're embarrassingly late in doing so, we want to note the passing of a giant of environmental law. Joseph Sax, who died March 9 at 78, taught law at the University of Michigan from 1966 to 1986 and pioneered legal principles for natural resources that remain the bedrock of many environmental protections today.

According to Berkeley Law,

Sax began his environmental legal work in the mid-1960s before environmental protection was even recognized as a legal field, and authored the groundbreaking Michigan Environment Protection Act. Popularly known as the "Sax Act," it was the world's first modern environmental law based on the public trust doctrine, which identifies natural resources as a public trust that demands protection. In short, the law enshrined the right of ordinary citizens to take action in the courts to protect air, water and natural resources from pollution or other damage.

As a New York Times obituary notes, the public trust doctrine Sax developed was used in close to 300 state and federal cases between 1997 and 2008, and has been adopted in numerous other countries.

The Sax Act provided the legal framework for one of Michigan's best-known environmental cases. In the 1970s, environmental groups sued under MEPA to block oil and gas drilling in the Pigeon River Country State Forest - part of a long, complicated court battle that eventually led to an agreement that restricted oil and gas development in the forest and served as a model for resource management.

Sax's influence also is present in a current case in which Encana Oil and Gas USA and Chesapeake Energy Corporation are charged with colluding to hold down bid prices in a 2010 auction of oil and gas leases. The public trust doctrine is at issue in the case because the companies are alleged to have shortchanged Michigan's citizens, who the state's constitution says must benefit-via the Michigan Natural Resources Trust Fund-when private companies profit from a public resource.

"It would be impossible," a former student of Sax's wrote, "to overstate Joe's influence on environmental and natural resources law over the last half century. In the 1960s, he and a handful of others literally invented the field."