Consumers Energy summer rates a plus for residents, wallets & environment

The change prompted some scary headlines like  “Consumers Energy electricity rate increases 50% during peak hours.” But the real story is this new summer rate – called a peak rate or time of use rate – is a proven strategy to help us save money on our utility bills and protect our environment. Here's how.

The cost to generate electricity is not the same throughout the day. In Michigan and in other states, electricity generation costs are lower when pollution-free electricity, like solar, is abundant relative to demand, like during sunny weekday afternoons. Costs are also lower when demand for electricity is low, like later at night.

Costs are higher in the evenings as the sun begins to set and electricity use increases as people return home from work or school. During the summer, when lots of people have their AC and fans running, demand is especially high. These high demand times are called peak times.

The new summer peak rate better reflects the cost to generate electricity and it sends an economic signal to customers, incentivizing them to use energy during non-peak times. Under the plan, when customers shift energy usage – like running the dishwasher or vacuuming – to times when energy is not in as much demand, they stand to save money on their utility bills by taking advantage of a lower rate.

Rates that vary based on when energy is used have been shown to be effective in changing peoples' habits. A 2019 Consumers pilot program, for example, found that energy use was reduced 3.5% during peak hours under this rate.

How both utility customers and the environment benefit

Utilities have to have enough power plants and renewable energy to meet peak demand. Plus, they are required to have 15% extra energy on reserve for cases of extreme energy use, like hot summer afternoons. 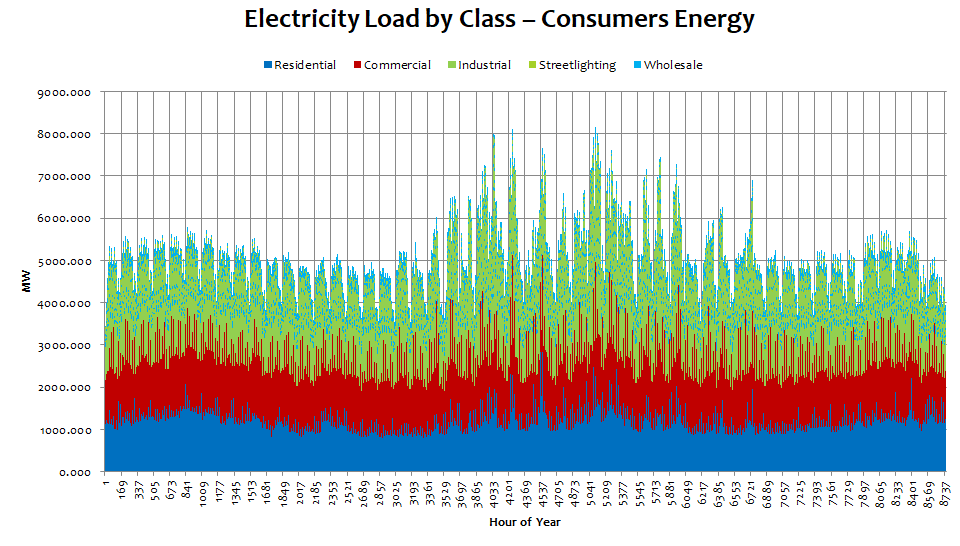 The chart above shows the annual energy use for Consumers Energy by customer class and hour of the year. (Its usage pattern is substantially similar to that of other utilities.) The taller green spikes during the summer months indicate peak energy usage, which occur only a few times a year. In fact, Consumers dips into the 15% energy they have in reserve for only 54 hours a year, while DTE uses it for 80 hours.

Still, utilities have to have enough power plants and generation to supply energy during those times. And we, the utility customers, are the ones that pay to operate and maintain those plants, even though they sit idle for the majority of the year. In short, customers are paying a lot for energy generation that we only use for a few hours.

Most of these “peaker plants” – or power plants that are only around to serve peak demand – are polluting fossil combustion plants, like oil and gas power plants. These plants pollute the air and contribute to climate change. Both pose devastating effects on our planet -- like frequent, intense weather and changing ecosystems – and our health – like intensified heart disease, lung disease and heat stroke.

If we all collectively reduce peak energy usage, we no longer have to pay utilities to keep peaker plants on standby. Utilities could retire them, and customers would thereby avoid the cost for them and we would eliminate a big source of air pollution.

An analysis conducted by 5 Lakes Energy on behalf of the Michigan Environmental Council found that expanding the peak rate method to all customer classes and increasing the use of programmable thermostats could reduce utility costs by over $200 million a year. It would also help improve air quality, combat climate change, and protect public health by spurring utilities to take expensive, polluting peaker plants offline.

How to save under the new summer peak rate

If you are a Consumers Energy residential customer, you are already enrolled in the new summer peak rate. DTE Energy is slightly behind and is currently piloting its new rate with plans to roll it out to all residential customers next year. Here is what you can do to further minimize costs when the new rates go into effect: