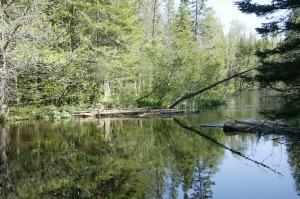 Our friends at the Anglers of the Au Sable have the enviable task of protecting and restoring one of the country's most beautiful and best-loved trout streams. If you've spent any time there you know it's a special place. With good reason, part of the river is called the Holy Water.

Still, it's been more than a decade since someone stepped back to take a big-picture snapshot of how the Au Sable is faring. The Michigan Department of Natural Resources published its comprehensive, 148-page assessment back in 2001. A lot has happened since then.

Being smart folks-they are an MEC member group, after all-the Anglers decided it was time the river had a checkup. They tapped Jeff Alexander, a respected Michigan environmental reporter and author, to assess the state of the Au Sable and the outlook for its future.

You can view the report here .

All in all, it's an encouraging read. Alexander reports the river's water quality and aquatic insect populations remain in great shape. Despite record heat in recent summers, much of the river is staying plenty cool for trout. Erosion control and habitat improvement projects are paying off. And after a population decline in the 1990s, the fish themselves are making a strong comeback. Consider this excerpt from the report:

Evoke a mental image of a football field, a rectangle of grass covering roughly one acre of land, and envision it submerged under three feet of translucent water. Then imagine tossing in 2,187 trout-mostly small browns, brookies and rainbows-into that imaginary pool.

With 20 trout per square foot, it would be quite the fishing spot. It would also be a mirror image of the trout fishery in a segment of the Au Sable River's legendary Holy Water

Still, the Au Sable and those working to protect it face real challenges in the years ahead. Further climate change and warm discharges from dams will put added stress on trout in parts of the river. Pollution is leaking from riverside septic tanks. Meanwhile, zoning loopholes are allowing large new homes to be built on the river's banks. And with the watershed's first deep shale gas well having been drilled recently, concerns about fracking's potential impacts on the Au Sable never have been higher.

You can be sure MEC is eager to help meet those challenges. We're partnering with the Anglers, Trout Unlimited and other groups to make sure Michigan has strong policies in place to protect and improve this truly world-class resource, along with the state's other 36,000 miles of rivers and streams.

As retired DNR fish biologist Steve Sendek told Alexander, "The Au Sable is a crown jewel but you've got to keep polishing it."