Many Michigan families once had a set routine on school day mornings. Now, they are hazy due to COVID-19. The pandemic not only threatens public health and school openings, it could impact how well children concentrate and succeed academically.

Some families, however, have struggled to get children to school and to learn effectively at no fault of their own long before the pandemic began.

Long treks, damaged sidewalks, morning rush traffic, high-speed roads and lackluster transit options threaten children’s abilities to not only get to the classroom before the bell, but safely.

Once in class, industry can hum, traffic can honk and HVAC systems can falter, creating noise and temperature influxes that make learning uncomfortable.

And whether at recess, at sports practice or at a desk, air pollution from nearby vehicles, factories and chemical vapors from the ground can cause respiratory problems that keeps kids at home, distracted at their desks, unable to exercise and more susceptible to COVID-19.

All of these environmental factors children face during the hours they spend at school or on their way to it hurts their ability to thrive academically and take on opportunities.

And oftentimes, threats to education are compounded through generations on Black and Brown communities that are also continuously oppressed by poor healthcare access, poor economic mobility and poor school funding.

These educational, safety and health threats are created by the environments around schools and, whether intentional or not, environmental racism.

A report released July 3 by University of Michigan’s Dr. Paul Mohai and University of Maryland’s Byoung-Suk Kweon seeks to turn the tide on environmental hazards that impede childhood development. “Michigan School Siting Guidelines: Taking the Environment into Account” is a years-long project that urges Michigan to adopt something 26 other states have: a statewide school siting code. 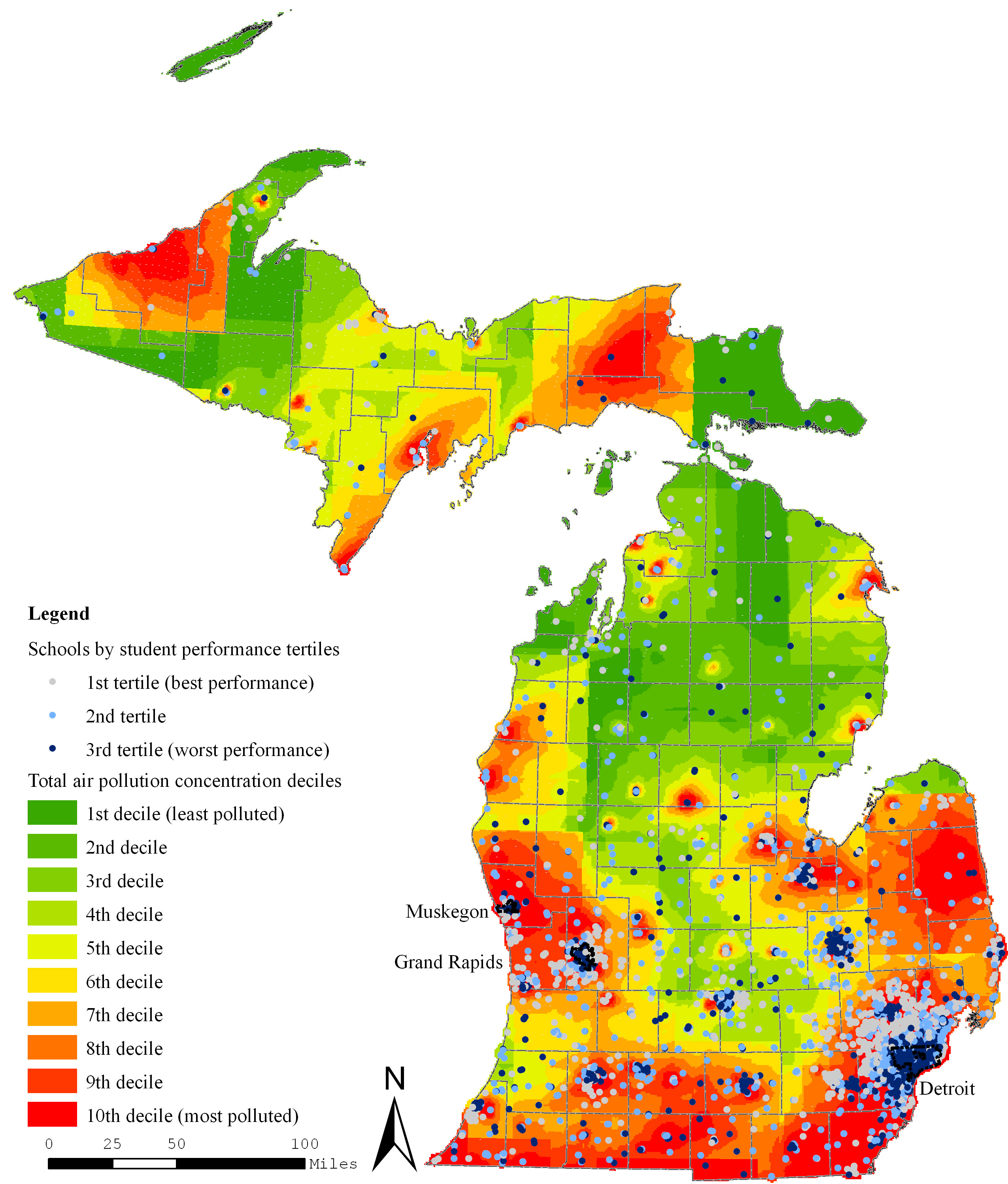 Creating uniform, mandatory safe school siting guidelines that is informed from beginning to end by impacted communities could help keep schools, students, staff and parents away from air and ground pollution. It could force developers to consider the environmental quality around school grounds and give Michigan’s underfunded school systems the resources to support their students’ health. A healthier environment leads to healthier students leads to better educational outcomes, the report indicates.

As school districts consolidate and as Michigan grapples with its systemic racism, changing the way schools are sited is needed to protect people, say Michigan Environmental Council board member Mozhgon Rajaee and MEC staff member Tina Reynolds, who both worked on the report.

“You’re setting that child up from kindergarten on to have deficits and struggles,” Reynolds said, describing the current reality for Michigan communities. “And then there is the expectation children are reading by third grade or they will be held back a grade? They may have been sick, not able to go to school or concentrate.”

Today, no bandwidth and resources

Rajaee and Reynolds have long fought for the well-being of children. It was why they were brought onto the report’s team in 2013 with dozens of other environmental health, education and planning leaders to provide policy solutions to decision-makers.

As a graduate student, Rajaee studied school siting methods across the country. Now, as an Oakland University professor of environmental health and justice, she studies how structural forces influence communities and how altering them promotes a better quality of life.

Both collaborate with communities, activists and residents.

Yet, despite their expertise, Rajaee said she still learned much about the “cascade” effect ill-placed schools have on students’ health, safety and education. No participant had the sole capacity to work directly on school siting – Drs. Kweon and Mohai had to bring in siting experts from outside the state.

That included school district employees, who said they were not equipped to assess a site properly when closing or constructing a school, Reynolds said.

The report noted that schools often only have the funds to purchase cheap land to fit the large spaces, amounts sometimes set by precedent rather than actual need.

“What it ends up doing is forcing those schools to the periphery of the community because the school needs a huge chunk of the land,” Rajaee said. “This requires more resources to connect the school to surrounding infrastructure.”

Municipalities are burdened by the extra roads, sidewalks and other necessities needed for these periphery schools. Children are burdened with longer travel times, more vehicle pollution and other environmental hazards.

Regardless of whether a school is found on the edge or in the center of a municipality, without the resources to implement proper school siting, children spend more school days sick, late to school or distracted at their desks, leading to diminished test scores, studies the report cites show. Those children are often members of long-disenfranchised communities that are low-income, Black and/or Brown.

Without bandwidth and resources, but with strong collective experience in education systems and environmental health, report participants knew that a solution to school siting must bring people together.

The report, drawing upon expert insight and siting plans of other states, suggests state departments jointly create school siting guidelines with the guidance of numerous groups and people, from planners to environmental health experts to school administrators to transit advocates.

Rajaee pointed out two stakeholder groups were particularly important in siting decisions: children and their parents. Their voices would offer them an opportunity to fight back against the environmental racism and disenfranchisement poor school siting imposes.

“They’re the ones that are going to galvanize the neighborhood,” she said.

Rajaee said all stakeholders should be involved from the beginning of the state’s guideline creation, not just for a “yes” or “no” vote.

When a new building or consolidation is being considered, resource-strapped schools and cookie-cutter developers would have guidelines to follow, including community stakeholders throughout the decision-making process.

The next step is to get the report’s policy recommendation implemented. A seven-bill package introduced in 2017 would have required environmental siting assessments for school construction and expansion; create statewide water and air quality test plans; and create an environmental education task force. It did not pass.

Given the COVID-19 pandemic, Reynolds said it is as good a time as ever to better public health in places our children spend so much time in, preparing themselves for good futures.