With lead in the spotlight, MEC-led coalition calls for more state funding to protect kids

A lot can change in five years.

MEC Health Policy Director Tina Reynolds convened lead advocates in 2010 to form the Michigan Alliance for Lead Safe Homes (MIALSH) because lead poisoning received almost no attention in Lansing, despite being a completely preventable condition and one whose health effects cannot be reversed once a child is exposed.

During the coalition's first Lead Education Day at the state Capitol, Reynolds and allies were met with puzzled faces from many lawmakers who thought the lead problem was solved when lead-based paint was banned in 1978. (About 70 percent of Michigan's housing stock was built before that ban, so thousands of our state's children are still exposed each year to lead from paint in older homes.)

Wednesday's fifth annual Lead Education Day, however, came at a time when lead poisoning could hardly be a more prominent issue.

The LG weighs in

The poisoning of Flint children from lead in corrosive city water is a profound tragedy and a staggering failure of government to protect public health. It also has put an unprecedented spotlight on lead issues, providing a must-seize moment to face Michigan's lead problem head-on.

"Now it's something everybody is thinking about," said Lt. Gov. Brian Calley, who kicked off Lead Education Day with remarks to the nearly 50 MIALSH members from all over the state who braved a snowstorm to meet in Lansing with legislators and urge increased state investment in successful lead-abatement programs. "I think it is time that we set some very ambitious or bold goals when it comes to eradication. We have an open door here." 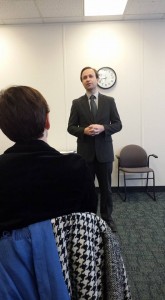 Calley said lead advocates should aim high in calling for a greater state funding commitment to clean up lead in homes across Michigan, noting that-while lead abatement in homes requires significant investment-it is relatively inexpensive, compared to the steep cost of infrastructure upgrades needed to remove lead service lines from municipal water systems. "None of this minimizes or changes what needs to happen in Flint," he added.

Calley also encouraged MIALSH members to tell lawmakers that, if they want to get things done to prevent lead poisoning, they should give him a call. "I am eager to be a partner in this effort, if you'll have me," he said, adding-with a gesture toward the Capitol-"I do know how to make things go in that building over there."

The lieutenant governor also presented MIALSH and MEC with special tributes from the governor's office thanking the organizations for their commitment to positive change for Michigan's people and communities.

Following Calley's remarks, MIALSH advocates fanned out across House and Senate offices to deliver information packets to every state legislator and meet in person with 72 of them.

Beefing up the budget ask

When Reynolds and MIALSH partners organized the first Lead Education Day, the state did not spend any general fund dollars on making homes lead safe. A select few Michigan communities receive grants from the U.S. Department of Housing and Urban Development for lead abatement, but even those programs have seen budget cuts and become more competitive in recent years. Some communities, including Grand Rapids, lost their federal funding completely this year. 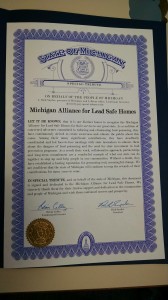 Thanks in no small part to the relationships formed during earlier Lead Education Days, MIALSH successfully secured $1.25 million in the 2014 state budget, marking the first commitment of general fund dollars for lead abatement programs in decades. Reynolds and partners were able to increase that amount to $1.75 million in the 2015 budget and hold it at that level for the current budget year, despite belt-tightening in many other programs.

MIALSH is adding significant muscle to its budget ask for 2017. Based on the 679 Michigan children diagnosed with severe lead poisoning in 2014-a number that does not include children exposed at lower but still-damaging levels-and a typical abatement cost of $10,000 per home, the coalition is calling on policymakers to dedicate $6.75 million to making homes lead-safe.

Along with the funding request, MIALSH advocates encouraged lawmakers to support other policies, including:

A message of hope

Along with these policy asks, MIALSH advocates presented lawmakers with compelling evidence that-in addition to fully addressing the disaster in Flint-Michigan must do more to protect children from lead exposure, with the ultimate goal of ending lead poisoning outright in our state.

They noted, for example:

The scope of the lead problem can seem overwhelming, but MIALSH advocates made it clear during meetings with legislators that ending lead poisoning in Michigan is an entirely achievable goal.

"I know sometimes a constituent will call with a problem and there's not much you can do to really help them," Reynolds said in a meeting with Alex Porrett, legislative assistant to Rep. Chris Afendoulis, a Grand Rapids Township Republican who co-chairs the House subcommittee that recommends budget appropriations for lead abatement and other health programs. "With the lead problem, we know what to do to fix it. So it's a message of hope."