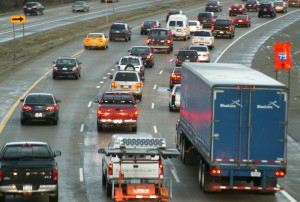 Public comment is being accepted through this Friday, Aug. 31, on the Michigan Department of Transportation's (MDOT) 2035 Long-Range Transportation Plan.

The current draft plan largely ignores the public's demand for more transit and pedestrian options. Instead, its heavy focus on roads ensures we'll be driving even more in 2035 than we do now, in spite of increasingly volatile gas prices, our aging population, and a younger generation that's seeking other ways to get around.

We urge you to put your name to this petition which urges MDOT to revise the plan to focus more on public transportation options and less on increasing motor vehicle travel and highway expansions.

The Michigan 2035 State Long Range Plan is a high-level summary of current indicators and initiatives which guide the Michigan Department of Transportation's (MDOT) project selection until 2035. It provides a policy framework; decision-making principles; a vision, and goals and objectives to move toward the vision. Michigan's transport vision and direction is important because infrastructure investments are expensive and last for generations. What we plan for and build in the near term will determine our development patterns and mobility/accessibility options for decades.

The draft Long Rage Plan projects slow general population growth until 2035, with slight increases in elderly and immigrant populations. It assumes continued disinvestment in existing urbanized areas and increased suburbanization. Based in large part on these assumptions, the plan is oriented toward feeding a presumed hunger for increased personal vehicle miles traveled (VMT).

The amount we travel in our personal vehicles has a direct impact on the environment. The transportation sector accounts for roughly 24 percent of Michigan's greenhouse gas (GHG) emissions - one of the state's largest sources. Much of these climate-changing emissions could be avoided by reducing the amount of VMT.

The role that the state must play in curbing GHG emissions in the transport sector is to focus its resources away from highway and road expansions. Existing infrastructure maintenance, public transportation, intercity passenger rail and walking and biking facilities must be served a larger slice of the pie. Now is the time to readjust that focus.