Panelists discussed the merits of proposed changes in Michigan's speed limit laws at Wednesday's forum hosted at the Michigan Municipal League and moderated by Tim Fischer of Transportation for Michigan and the Michigan Environmental Council. Concerns about restricting methods of setting speed limits to the 85th percentile rule were expressed by several panelists, while consensus emerged that engineering and planning fixes are the best way to ensure safe and efficient roadways for all users.

Potential legislation being discussed would mandate that the 85th percentile method of setting speed limits is used more uniformly across Michigan (currently, many municipalities are setting limits in response to other factors such as pedestrian volumes on a roadway). The 85th percentile method sets the speed limit at the point which is exceeded by 15% of drivers. If 15% of vehicles in a 25 MPH posted zone were traveling faster than 30 MPH, the method would set the speed limit at 30 MPH. Setting limits based on this method relies on research that shows that car accidents are reduced when the 85th percentile is the posted speed limit, and that drivers respond more to roadway factors such as visibility distance than they do to the posted speed limit.

Legislation is expected to be introduced in the next few weeks. 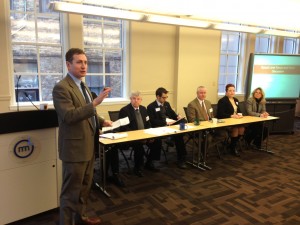 The majority of panelists saw fault with passing rules that would require setting speed limits based on just one of many tools available to planners. Carolyn Grawi, Director of Advocacy and Education at the Ann Arbor Center for Independent Living said that while the 85th percentile tool makes sense for certain roadways, such as restricted-access highways, setting speed limits with the tool across the board ignores local contexts such as roads near school zones and neighborhoods. Grawi also opposed using the tool in residential areas based on the potential that actual speeds may "creep" up if posted speeds are raised. Even slight increases in vehicle speeds decrease survivorship from pedestrian and vehicle accidents and make it more difficult for individuals with disabilities, young children, and seniors to navigate roadways.

Most panelists also argued that the tool neglects the needs and rights of non-motorists. "We can't consider the traffic in a vacuum," Michigan Suburbs Alliance Programs Director Richard Murphy said of the tool. Because the tool only counts free-flowing traffic, vehicles slowing for vulnerable roadway users, such as pedestrians, bicyclists, and wheelchair users, are not included in the 85th percentile determination. By excluding slower-travelling vehicles, 85th percentile speed limits might not accurately portray local uses of roads. Murphy also suggested that changing roadway designs, such as repurposing underused lanes for parking or transit could reduce traffic speeds and achieve similar safety results.

Adrianna Jordan, Michigan Fitness Foundation's Operations Coordinator for Michigan's Safe Routes to School program suggested the rule likely conflicts with Michigan's Complete Streets Policy. The 2010 policy requires that roads be designed with all users in mind, where the 85th percent tool only accounts for vehicles.

Panelist Suzanne Schultz, Managing Director of Design, Development, and Engagement for the City of Grand Rapids summed up the opposition to legislating with one particular tool neatly when she said that "roads are for moving goods and people, not just vehicles." Schultz also promoted engineering fixes over legislating the 85th percentile tool, mentioning positive economic effects along Business Route 131 in Grand Rapids from a recent four lane to three road diet.

MDOT Design Administrator and panelist Brad Wieferich said that MDOT and road agencies are in the middle of the process, and that MDOT is neutral until more specifics on the legislation come forth. Wieferich's presentation turned the conversation to solutions beyond the 85th percent rule, towards engineering and planning solutions to make Michigan roads safe for everyone. Complete Street elements, such as curb bulb-outs, 4-3 road diets, street trees, and bicycling improvements were mentioned by all panelists, who agreed that better road design would have the greatest effect on roadway safety.