Q&A: Michigan Ice Fest evolves from 'a handful of climbers meeting in a bar' to a world-class celebration

After a hesitant beginning, it seems winter is here in earnest. Colder weather might not be everyone's cup of tea, but it's great news for the organizers of Michigan Ice Fest.

From its humble roots-a few friends discussing a shared hobby over pitchers of beer-Ice Fest has grown into one of the biggest ice-climbing events in the country. Each winter, some of the world's best climbers make the trek to Munising, on the shore of Lake Superior in the Upper Peninsula. Those in the know describe the area as ice-climbing paradise.

With a few weeks to go before this year's Ice Fest (Feb. 10-14), we checked in with Matt Abbotts of Down Wind Sports in Marquette, who's helping organize the event. Abbotts urges anyone interested in the sport to join in the festivities and give ice climbing a try-or just kick back and watch the pros.

MEC: Let's start with the basics: How long has Michigan Ice Fest been going on? And can you tell us a little about how the festival got started?

Matt Abbotts: Ice Fest is put on by an organization called Michigan Ice, which is headed up by Bill Thompson of Down Wind Sports in Marquette. He's been to every Ice Fest since the beginning. Ice Fest has been going on since the early '90s but no one is really sure what year it started. It's one of the oldest ice climbing events in the country. It started as just a handful of climbers meeting in a bar and giving slideshows on the wall. This year we're expecting around 700 participants and have some of the best climbers in the world joining us.

MEC: Have people been ice climbing in the U.P. for a long time, or is this a fairly new scene? And how big a scene is it?

MA: People have climbing ice in Munising for a long time but it's really taken off in the last 10 years. Outside of being really beautiful, Pictured Rocks has one of the highest concentrations of climbable ice in North America, so it's a magnet to those who climb ice. The area sees hundreds, if not thousands, of climbers throughout the winter, so it's a much larger scene than people expect.

MEC: Michigan Ice Fest has become a draw for climbers from all over the country. What's behind that success?

MA: The event has been so successful for a lot of reasons. The climbing is world-class, so that definitely draws in climbers, but it's also really accessible. Anyone can come to Ice Fest and have fun ice climbing. The socials are really great too. You might find yourself sitting around talking with professional climbers. It's got a real family vibe.

MEC: What makes for quality ice climbing? And how different are the skills and techniques from those used in rock climbing?

MA: What makes Pictured Rocks so incredible for ice climbing are the rocks themselves. The sandstone is porous, so water flows through the rocks and then freezes, making big frozen seeps hanging off the cliffs. There are hundreds in the area that make these big, beautiful ice formations. Ice climbing is a whole different animal when compared to rock. Some of the techniques are the same, but when you throw tools and crampons into the mix, you get something totally different. 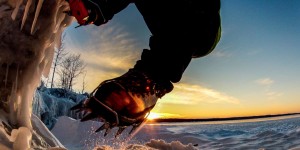 MEC: With all due respect, to someone who hasn't ice climbed before, it looks like you'd be have to be half-crazy to do it on purpose. Convince us that ice climbers are onto something, and don't just have a few screws loose.

MA: Ice is a lot stronger than people think. Most people wouldn't hesitate to walk out onto a lake with four or five inches of ice on it. Just stack that ice on top of itself over and over and imagine how strong it is. Think about how hard it can be to scrape that thin layer of ice off of your windshield. Now think if that layer of ice was several feet thick. It's amazingly stable. When done properly, ice climbing is really safe. If you feel comfortable with the idea of climbing rocks, you shouldn't be deterred by the ice. But don't take my word for it, come up and try it!

MEC: Is there something for non-climbers to enjoy at the Michigan Ice Fest? And for those interested in getting started in ice climbing, what should their first step be?

MA: We have slideshows every evening by the best climbers in the world that will be inspiring and jaw-dropping for both climbers and non-climbers. Just watching others climb during the day can be fun. And if you haven't seen the ice caves, pillars and walls around Munising, it's a real treat. The evening socials are also a blast for everyone who attends, whether they are climbing or not. If you're looking to try it out, I'd start by registering for the event and signing up for a class. We offer a lot of beginner classes throughout the weekend that are a great place to start. They include all of the gear you need and friendly, supportive instruction. I'd encourage everyone to just give it a shot. You can do it.