Some 100 people from across the state traveled to Lansing last Wednesday to rally lawmaker support for ending lead poisoning in Michigan.

Eighteen teams of three to five advocates fanned out across the State Capitol, meeting with approximately 90 state legislative offices as part of the largest-ever Lead Education Day—an annual event coordinated by MEC and our allies in the Michigan Alliance for Lead Safe Homes (MIALSH).

Participants included state and local public health officials, environmental health and justice advocates, and lead testing and abatement professionals. Most importantly, we worked to ensure every team included a parent—and in several cases children—who could tell personal stories of living in homes and communities impacted by the devastating consequences of lead poisoning. 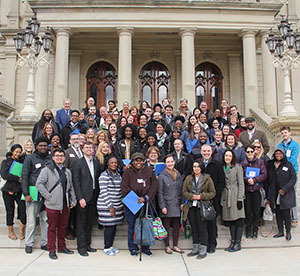 In addition to 90 sit-down conversations with lawmakers and their staff members, we ensured all 38 State Senate and 110 State House offices received a comprehensive packet of materials summarizing the latest science on lead poisoning and prevention strategies. It included a tiny vile of sand—a powerful visual demonstration of the small amount of lead that can contaminate a 1,500-square-foot home.

Over lunch, Angela Ayers, director of strategy for Governor Rick Snyder, updated our group on the work of the Child Lead Exposure Elimination Commission. MEC Health Policy Director Tina Reynolds and several of her MIALSH partners serve on that Commission which will soon release a comprehensive policy agenda for ending lead poisoning in Michigan. Our teams emphasized many of its forthcoming recommendations in their visits with lawmakers.

Among the many highlights of the day, the turnout of parents from Grand Rapids gave the 2018 Lead Education Day a stronger West Michigan voice than ever before. With leadership from Healthy Homes Coalition of West Michigan, a top MIALSH partner, the Grand Rapids parents who worked through schools and other channels to organize a (literal) busload of participants deserve special thanks.

With Reynolds serving as the Day’s driving force, several MIALSH members made major contributions to the success of this important event, as did many MEC staff members who helped with logistics and guided education teams around the Capitol. It was an impressive team effort and it had a big impact.

As Reynolds noted, MIALSH’s efforts in recent years have transformed the State Capitol debate on this issue. “You can see it in the response of state legislators to our message and the questions they ask,” Reynolds said. “When we first started, the vast majority of lawmakers thought lead poisoning was thing of the past or a problem limited to our big cities. Now, state leaders from every corner of Michigan are tuning into this issue and looking for updates on progress being made in their districts.”