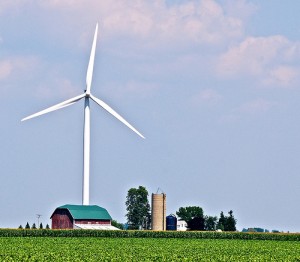 Electricity from renewable clean energy sources in Michigan is at least 26 percent less expensive than comparable coal-fired electricity according to an annual analysis by the Michigan Public Service Commission released this week.

The report also says that state utilities are going to meet the 10 percent renewable electricity goal by the target date of 2015. The highlights are documented in the MPSC's press release.

The most recent clean energy contracts - primarily wind-powered electricity - are half as expensive as just five years ago, the report concludes. The report uses "levelized cost," which accounts for initial capital, discount rate, as well as the costs of continuous operation, fuel, and maintenance. Renewable electricity costs are just under $79 per kilowatt hour. Coal costs are $133 according to the MPSC's estimate, or $107 using Consumers Energy's figures.

The figures do not take into account "externalized costs" that aren't reflected in rates - for example, the health care expenses due to coal-burning pollutants are not factored into the figures.

The costs for clean electricity are so low that Consumers Energy is seeking to eliminate its renewable energy surcharge, and Detroit Edison has lowered theirs from $3/mo to 43 cents.

Will hard data dissuade defenders of the status quo from continuing to claim that renewable energy is too expensive? Of course not. Will it be a critical factor in Gov. Rick Snyder's eventual proposal - expected late this year or early next - on where to go next with renewable energy development? We suspect so.

You can let the governor know you want more of the cheapest and cleanest energy sources by contacting him here. And you can tell your state rep and senator the same thing here and here.