For Joan Rose, water has always held a kind of magic. Maybe that’s in part because Rose, Homer Nowlin Chair in Water Research at Michigan State University, was born and raised in a place without any water to speak of: Victorville, California, which she calls, “a sleepy little desert town.” As a kid, water meant fun. It meant family beach vacations or lakeside camping trips.

You can still find Rose having fun on the beach—today she’s more likely lounging in Saugatuck or on Mackinac Island than the Pacific Coast—but her relationship with water has become something much deeper. It is scarcely possible to overstate the impact and influence of her pioneering work on the causes and prevention of waterborne diseases.

To paraphrase one of her colleagues, if you find a scientific paper on water quality and public health that Rose didn’t write, the smart money says one of her past students, or one of theirs, did. 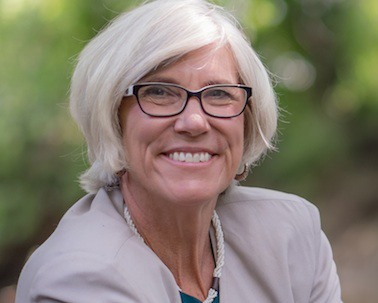 For breakthroughs that have brought safe drinking water to countless people in the developing world and a commitment to tackling the public-health threats posed by crumbling water infrastructure here at home, Rose has earned the Michigan Environmental Council’s 2018 Helen and William Milliken Distinguished Service Award.

“I’ve known Joan and respected her work for a long time, and I’m glad we can shine a little light on her major contributions to water quality and public health with this award,” says MEC policy director James Clift. “I have always been impressed with her focus and the ever-present connection between her research and solving real problems confronted by communities today.”

Rose had an early interest in science, which her parents fueled with an ant farm and a chemistry set. She started her freshman year at the University of Arizona studying general biology and planning to become a doctor. But her career came into sharper focus during a first-semester lab course, when she got an up-close look at microscopic life. “When I started looking down the microscope, I changed immediately to microbiology,” she says.

After earning a master’s degree at the University of Wyoming, Rose returned to Arizona and found work at a wastewater treatment plant. Say what you will about the interplay of raw sewage and desert heat—Rose loved the work, and thought she might stick with it. “It was a whole community’s wastewater, and I was doing the testing to see if we could discharge into the river,” she says. “That struck me as really important.”

Ultimately, Rose opted to pursue a public health-focused position at the University of Arizona while earning her Ph.D. there, and then joined the faculty of the University of South Florida. It was during her time in Florida that Rose became recognized as the world’s leading expert on Cryptosporidium, a protozoan pathogen behind several deadly disease outbreaks, including one in Milwaukee that killed 69 people and sickened 400,000 in 1993.

The pathogen had only been observed in livestock until around 1980, when it began showing up in AIDS patients. Rose suspected the source was contaminated tap water. She created a test to identify Cryptosporidium in drinking water—the genesis of the method still used today—and launched a nationwide survey of water supplies, leading to the first scientific publication on Cryptosporidium in drinking water. Rose’s work assisted in identifying the pathogen as the culprit in Milwaukee—the largest documented waterborne disease outbreak in U.S. history—leading to improved water treatment that saved lives there and around the world.

Since then, Rose’s work as a self-described “water detective” has made an impact all over the globe, cementing her place among the leading figures in the effort to provide safe drinking water to the 1 billion people who lack it. In 2016, she won the Stockholm Water Prize, considered the world’s most prestigious water award. In 2015, Rose was named an honorary citizen of Singapore, in recognition of the years she spent helping the island nation—which lacks lakes or aquifers and was struggling with water shortages—to develop what is seen as a global model for a safe, sustainable drinking water supply, one built largely on water recycling, rainwater collection and desalination. She also established and now leads the Global Water Pathogen Project, a partnership between MSU and UNESCO to share knowledge and prevent deaths from waterborne disease.

Despite her globetrotting, Rose has made Michigan and the Great Lakes a priority since moving here in 2003. When she arrived at MSU, Rose began convening a 2005 Water Fellows series in which stakeholders from around Michigan gathered with leading scientists to discuss the future of water science linked to policy. She held additional series on pathogens, harmful algae and other issues in 2007, 2009 and 2011. Those conversations introduced new concepts and technology to water professionals in Michigan and yielded stronger water quality programs statewide, says Shannon Briggs, a toxicologist with the state Department of Environmental Quality’s Water Resources Division.

The 2007 series, for example, introduced water quality managers to the qPCR method for detecting bacteria in water. Previously, checking water for E. coli and other bacteria—species that can cause illness but more commonly indicate the presence of other pathogens—required growing lab cultures, and took days or even weeks. With qPCR, which involves measuring DNA of indicator bacteria or pathogens, water managers could identify dangerous water pollution much more quickly and better protect public health.

When the Great Lakes Restoration Initiative began in 2010, several Michigan communities and organizations used the new information about qPCR to put together winning grant applications for funding to more quickly identify pathogens in recreational waters and better communicate with the public about beach closings. Today there are 15 qPCR labs around Michigan, directly due to Rose’s leadership, Briggs says.

“When Joan comes into the conversation, she adds new ideas, and she’s willing to help put them into place,” she says. “She’d already prepared us to take advantage of new technology, which resulted in a big change for Michigan. It led us to identify sources of contamination that cause beach closures. Then corrective actions could be taken to address the contamination, rather than poking around in the dark.”

Since then, the DEQ has collaborated with Rose to provide training at each of those 15 labs to implement real-time qPCR methods that not only identify fecal indicator bacteria, but can determine their source, be it cows, gulls, pigs or people. Rose and colleagues used that technique in a landmark study published in 2015. The researchers sampled 64 Michigan watersheds and in every single one of them found indicator bacteria that—using new source-tracking technology—could be traced to human waste from failing septic systems.

MEC and other advocates have regularly cited the paper to demonstrate the severity of Michigan’s septic problem and call for reform. The DEQ estimates that, statewide, 130,000 failing septics leak 31 million gallons of raw sewage into groundwater every day. Shockingly, Michigan does not have a statewide septic code—the only state where that’s the case. Rose has been an outspoken proponent for action in the Legislature, penning an op-ed and giving numerous interviews to help highlight the problem and the septic-code solution.

“Joan’s work on failing septic systems, and especially the advancement in our understanding of the relative contribution of humans to the problem of E. coli contamination, has been critical to moving this policy issue to the forefront,” says MEC’s Clift.

Those projects are only a small slice of Rose’s work in the Great Lakes region. She has served on the advisory board of the Great Lakes Restoration Initiative. Her research has identified invasive viruses that enter the Great Lakes through ships’ ballast water and attack native species. As the Flint water crisis unfolded, she opened her lab to the Virginia Tech researchers investigating the city’s water system and put local health officials in touch with one of the world’s top experts on Legionella bacteria testing and remediation.

"Joan Rose is a tireless innovator whose pioneering research is helping to improve water quality and public health worldwide," said MEC President Chris Kolb. "Her important work to track down contamination sources gives us the facts we need to improve public policies that will protect Michigan's amazing freshwater resources."

Her list of accomplishments and accolades may be ever-expanding, but colleagues say Rose is as down to earth as she is driven. “She’s got all these prizes, but as intimidating as her resume is, she’s humble enough that she’ll be out washing dishes in her own lab to help all of her staff keep up when a huge water sampling event comes up,” Briggs says. “When there’s work to be done, she’s in.” (Briggs also noted that Rose drives a Honda with more than 200,000 miles on it. “We tease her a lot about that,” she said.)

Rose is edging ever closer to the age when she thought she’d retire. Maybe she will, one of these days. It would give her time to work on the biography she hopes to write of British scientist Harriette Chick, an early pioneer in water disinfection. It would mean more time to spend with her two kids and four grandchildren.

But for now, Rose hasn’t lost any passion for her work, and she still finds magic in water. “It dissolves things. It moves things. Of course, it nourishes us too,” she says. “Water is just amazing.”