The legal battle of Michigan Citizens for Water Conservation (MCWC) v Nestlé has taken another turn. Nestlé has filed legal arguments to retry a water law case it lost in the trial court and Court of Appeals based on fact and judgment against Nestlé for violation of groundwater law. A three-month trial in 2003 determined that proposed Nestlé withdrawals near Big Rapids would unreasonably drop stream and wetland water levels. 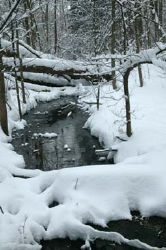 Nestlé agreed to an order from the Michigan Court of Appeals limiting its pumping during the dry summer or low flow seasons or periods. Nestlé eventually appealed its groundwater liability to the Michigan Supreme Court, which refused to hear the case.

In 2005 and 2007, during low flow periods, Nestlé kept pumping even though bottomlands were exposed, and little water flowed in the stream. MCWC and its plaintiffs asked circuit court Judge Susan Grant to adjust the order to reduce pumping to protect streams, as required by the Court of Appeals ruling. In response, Nestlé recently filed legal briefs arguing that it has a right to the water under any conditions and should be allowed to pump even if there is not adequate water in the stream for various water uses.

The principle that Michigan's streams, wetlands, and underground aquifers belong to the people--not to private individuals or corporations--is what Michigan Citizens for Water Conservation fights to uphold.

Last fall, Nestlé conducted a sham pumping “experiment” during high water level conditions that masked effects or impacts and ignored basic hydrological variables. They now want to use this report to undo the scientific findings that have been upheld by courts.

A hearing on Nestlé’s request and MCWC’s motion to reduce pumping to maintain adequate water in summer dry periods is scheduled to begin on March 23, 2009, in the Mecosta County Circuit Court.

MCWC continues to fight this seven-year battle in and out of the courtroom to uphold the principle that Michigan’s water belongs to its citizens, and no one has the right to own and sell it.

MCWC and other supporting organizations such as Clean Water Action, Food and Water Watch, West Michigan and Northern Michigan Environmental Action Councils, and individuals have formed a coalition, FLOW FOR WATER. The purpose of the coalition is to educate, raise funds, and support a nonpartisan citizen effort to support public control and protect the flows of the waters of the Great Lakes Basin. Those interested in learning more or joining this coalition and campaign may contact Terry Swier, president of MCWC at [email protected] or [email protected]