Lessons from Chicago for those working to close Detroit incinerator: Never, ever, ever give up! 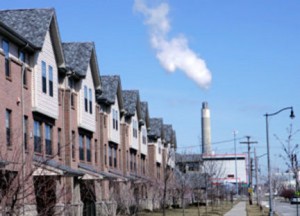 Kim Wasserman was terrified as she rushed to the emergency room with her 3-month-old baby gasping for air. The diagnosis - an asthma attack triggered by environmental pollution –started a chain of events that spurred Wasserman to lead the charge to close two dirty, aging coal-fired power plants in her neighborhood.

Much of the pollution that led to the asthma attack came from the Fisk and Crawford power plants in her Little Village neighborhood in Chicago. The incident kicked the community organizer into high gear, and she went to war.

Fourteen years later in 2012 - under unrelenting pressure from the community, tough new pollution control rules and increasingly affordable competition from cleaner energy sources - the plants shut down. Chicago is now a coal-free city.

Wasserman was the inspiring keynote speaker at the "Coal to Clean Energy" conference I attended last week in the Windy City. Her long, dogged and ultimately successful fight was fraught with dead-ends, betrayal, infighting, disintegrating coalitions and failures. Her Odyssey is a valuable lesson for activists everywhere who seek transformative change: Be in it for the long haul and keep your eyes on the finish line!

Those lessons hold promise for health and clean energy advocates in Detroit who are engaged in a years-long fight to shutter the world's largest municipal waste incinerator, which continues to operate despite overwhelming evidence that:

MEC is part of the Zero Waste Detroit coalition that is leading the effort to make a safer and more attractive Detroit. We're a relative newcomer to this game, even though we've been at it for years. Many of our ZWD allies have lived with the incinerator's fallout for decades. They've endured the same ups and downs that Wasserman did in Chicago - inept city leadership, indifferent environmental regulators, coalition politics and treachery, unkept promises, and halting progress followed by demoralizing setbacks.

But they - and we - are still at it. And we will be until this toxic, aging legacy of yesteryear no longer is a daily threat to the community it purports to serve, and stops being a financial drain on a city that can ill afford it.

Maybe 2014 will be the year justice prevails. Or maybe it'll take another decade. If it seems hopeless, it's not. Just ask Kim Wasserman.