Sounds like a pretty nice life, but the warbler has had a rough go of it. Twice in the past 40 years, its population has dipped below 170 breeding pairs as modern forest fire suppression changed its habitat by eliminating the newly grown jack pine scrub forests that emerge from fire-scarred landscapes. 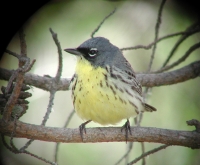 However, thanks to the efforts of government agencies, nonprofits, and concerned citizens, there are now roughly 2,000 breeding pairs. Conservation leaders say that means it’s time to remove Kirtland’s warbler from the federal Endangered Species list, where it’s been since 1973.

We checked in with Abigail Ertel from Huron Pines, a Gaylord-based nonprofit whose mission is to conserve the forests, lakes, and streams of northeast Michigan. She’s the coordinator for the effort to ensure that the Kirtland’s warbler continues to survive and thrive after leaving behind the protections and funding of the Endangered Species Act.

MEC: It might seem strange to some people that a conservation group wants to remove a species from the Endangered Species list and the protections and resources it affords. Why is delisting Kirtland’s warbler a good thing?

Abigail: In the case of Kirtland’s warbler there is a strong, successful history of a variety of partners working together to help the population return from the brink of extinction. State and federal agencies, nonprofit organizations and academic institutions all have worked diligently to determine what the warbler needs on the landscape to survive. The birds need large tracts of dense jack pine aged 5-20 years, with low branches to provide cover for their ground nests. They also need active removal of brown-headed cowbirds from nesting areas because the cowbirds directly decrease the warbler’s nesting success. That work has paid off. Last year’s census reported more than 2,000 breeding pairs of warblers, and population numbers have been above the recovery goal of 1,000 breeding pairs for over a decade. This success has led the conservation community to recognize that a conversation about the future of Kirtland’s warbler needs to be reevaluated.

Huron Pines is working to usher Kirtland’s warbler off the Endangered Species list because it’s the right next step for the species, for the partners who have been working on its recovery, and for conservation. By transitioning the species from recovery to long-term survival, the objective of the Endangered Species Act is fully achieved. And while Kirtland’s warbler continues its adventure away from the Act’s protections, another species whose future is still uncertain can benefit from the funding once dedicated to the warbler.

Delisting isn’t the end of the warbler’s story or the challenges the species faces to survive. It presents a new opportunity for the public and private sectors to support and sustain the legacy of conservation surrounding the warbler and to help launch a new framework for successful natural resource protection.

MEC: Kirtland’s warbler is considered a conservation-reliant species. Can you talk a little about what that means, and what special challenges it creates for protecting the bird after delisting?

Abigail: A conservation-reliant species is one that depends on human actions to provide what it needs to survive and thrive. There are varying degrees of this reliance, but in the case of the Kirtland’s warbler, every element of its success is dependent on management decisions and priorities set by people. This is because it chooses to nest in a very particular type of habitat, and its small population size is particularly susceptible to threats. That a 100% conservation-reliant species like the warbler is a candidate for delisting is really exciting.

Although Kirtland’s warbler nests in some areas of Wisconsin and southern Ontario, the vast majority of the population nests in the jack pine forests of Michigan—a habitat that itself is rare, existing in a restricted range. The jack pine forest depends on fire for re-growth. Fires allow the cones of the jack pine to open, and the freshly burned soil provides the right growing conditions for the seeds. In recent decades, wildfires have been suppressed, leaving resource managers to mimic this natural process primarily through harvesting and replanting young jack pine seedlings. This practice provides the necessary nesting conditions for Kirtland’s warbler to reproduce successfully while also ensuring that other wildlife and plants that are part of the jack pine forest thrive without the presence of fire.

Brown-headed cowbirds, not native to Michigan, pose the largest threat to Kirtland’s warbler. Cowbirds lay their eggs in the nests of other birds. Some species can recognize the foreign egg, but the warbler cannot, so it ends up raising the cowbird nestling to the detriment of its own young. Recognizing the impact this was having, the U.S. Fish and Wildlife Service began trapping and removing cowbirds from Kirtland’s warbler nesting sites. Prior to this effort, fewer than one warbler nestling survived per nest on average. That figure has since increased to over three per nest.

Without continued habitat management and cowbird trapping, there is significant potential for the warbler population to decline once more. Both programs take time, money and people to make them happen. Those resources now are provided in part through Endangered Species Act funding that will cease when the species is delisted.

Huron Pines is working to broaden the base of support to make sure conservation for the warbler and jack pine forest continues to be a priority after delisting. The National Fish and Wildlife Foundation, with the support of the U.S. Fish and Wildlife Service, awarded Huron Pines $200,000 in 2012 to begin building a community stakeholder group and developing a fundraising campaign. The group—the Kirtland’s Warbler Alliance—will have the responsibility of advocating for the warbler with legislators, community leaders and people across the nation so that programs critical to its survival remain a priority. This initiative will provide a strong model for other Endangered Species efforts across the country.

MEC: OK, now for a little devil’s advocate: Why should we continue putting so much money, time and effort into protecting this one species? Why should people who aren’t bird enthusiasts care about the warbler?

Abigail: Management for Kirtland’s warbler doesn’t just benefit the warbler—it is important for the health of the entire jack pine forest. Areas of jack pine are clear-cut and replanted on a 50-year schedule so young forest continues to grow and support species like white-tailed deer, wild turkey, bear, and snowshoe hare, all of which are important species biologically and economically. Outdoor recreationists, hunters, economic leaders, business owners and representatives from the timber industry—just to name a few—have a stake in seeing management for Kirtland’s warbler continue into the future.

It’s also important for the people and communities of northeast Michigan to understand that jack pine is what our region has because of the sandy soils left here 14,000 years ago after the retreat of the glaciers. Because of these soils, this region has things like cold, clear groundwater-fed trout streams, jack pine, and Kirtland’s warbler. Working to protect the warbler ensures this region’s unique and defining natural resources are afforded long-term protection.

To get involved by going on a Kirtland’s warbler tour, scheduling a presentation for your group, making a contribution or joining the Kirtland’s Warbler Network mailing list, please visit kirtlandswarbler.org or contact Abigail Ertel at (989) 448-2293 ext. 14 or abby@huronpines.org.

Michigan Audubon, which supports the delisting effort, provides guided tours each year from May 15 to July 4 with the U.S. Fish & Wildlife Service. Information on those tours is available at www.michiganaudubon.org or by calling 517-641-4277.