Everyday people were Michigan’s environmental protectors long before statehood. It hasn’t changed since.

In 1959, E. Genevieve Gillette gathered conservation organizations and citizen activists like herself together. She was tired of the neglect faced by Michigan’s new state park system, which she had helped create.

The Michigan Parks Association was born from that meeting, and Gillette, its president, fought to improve the funding and direction the state gave to Michigan’s parks.

Soon after, she successfully lobbied the Michigan Legislature to pass a massive park bond. The following year, at 62 years old, she lobbied the U.S. Congress to pass a conservation fund and create Sleeping Bear Dunes National Lakeshore. Eventually, the two governments heeded all her demands.

More than 60 years later, civil servants gathered around a remembrance for Gillette: a newly erected historical marker at P.J. Hoffmaster State Park near Muskegon. Now, residents and tourists can read how one Michigan citizen led the charge in creating, expanding and funding Michigan’s state park system.

“She was a force of nature, literally,” said Dave Dempsey, about Gillette. “She was a one-person pressure group who put the heat on both state legislature and governors for many years and pushed funding for parks and the acquisition of land for the parks.”

Dempsey is the senior adviser for FLOW, which preserves and protects the Great Lakes through the public trust. Dempsey is also the author of 10 books, including “Ruin and Recovery: Michigan’s Rise as a Conservation Leader.”

Dempsey wrote the book while on sabbatical as Michigan Environmental Council’s policy director. Around the same time, he and MEC were identifying and coordinating historical markers that noted Michigan’s conservation history through an Americana Foundation grant.

“The idea was to stitch these together for people to illustrate the progress we’ve made after the last 150 years and build it up as part of Michigan’s overall history,” he said. “Environmental history sometimes takes a backseat to wars and governments and business and geography.”

Chief among the “backseat” stories of Michigan are the activists who have always been the movers and shakers of environmental change. People like Gillette, the “forces of nature.”

Although Gillette garnered a new title as Michigan Parks Association president, her efforts changed little from years prior. She had always fought for a better state parks system.

On her weekends off from a Detroit flower shop, she scouted land for parks. In between landscaping projects for cities, colleges and private entities, she lobbied the government for better parks and better funding. She collaborated with her peer, P.J. Hoffmaster, Michigan Department of Conservation director, while coordinating reports and research to supplement her lobbying.

All of her extra efforts were voluntary, Dempsey said. A daughter of a farmer with a passion for nature and a penchant for change-making, Gillette made things happen.

“We tend to think of presidents and governors as people who set the pace on environmental protection, but it’s really the citizens that forced them to do it,” said Dempsey.

Michigan residents currently lead the charge on many environmental issues, from lead-free pipes in Flint to PFAS cleanup in Rockford.

We should see history the same way we see the present, Dempsey said: as a series of activist efforts. The Michigan Historical Markers are meant to provide that lens.

“Not long after the state was settled by European settlers, the war on our natural resources began,” he said. It was people versus perpetrators.

More often than not, the people prevailed. In the 19th century they capped excessive logging and fishing. In the 20th century, they kept poison out of food and water.

Those events, and their fighters, are now memorialized with historical markers to inspire future visitors.

The staying power of signs 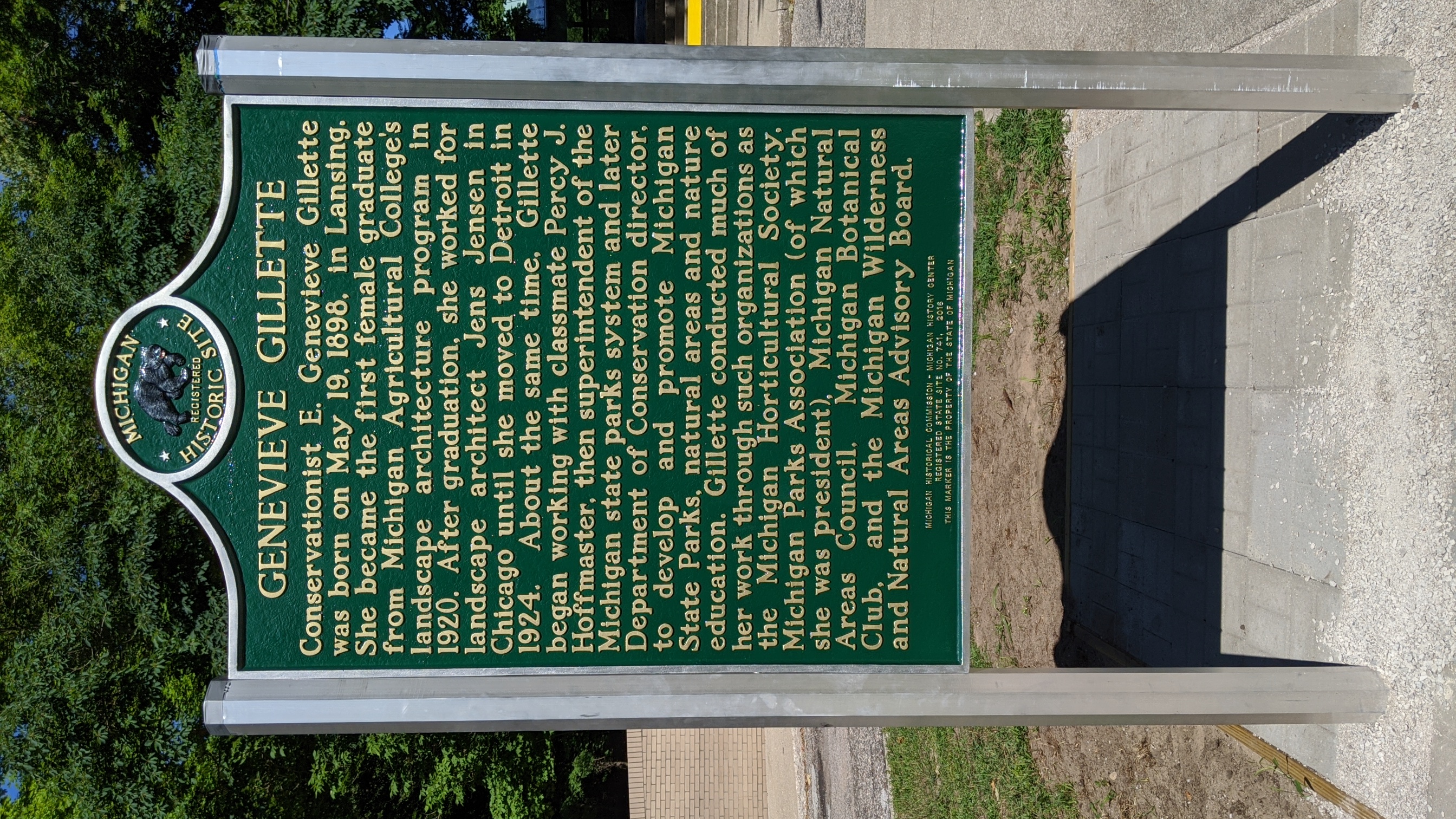 Now, in 2020, Gillette’s historical marker stands at the park, in front of the center. But in each state park, an intangible wisp of her influence lingers as well.

The power of a historical marker lies in its ability to explicitly describe an event or person that might otherwise be lost from the public’s common knowledge, the Michigan History Center suggests. Signs have staying power. Most are found in public places, whether it be a park, a rest stop or along a sidewalk.

The Heritage Conservation Trail that Gillette’s marker is part of is 21 sites strong, all spread out in public places across Michigan. Other stops include MEC-funded markers of the citizen-led efforts that led to the Detroit River’s recovery and protections for Kirtland’s warbler populations in northern Michigan.

Dempsey is a bit unsure what future generations will decide are worthy moments and worthy people to remember – he thinks the recent flourishment of grassroots land conservancies could be one. But he says he does know, regardless of what is chosen, that everyday people will be at its core.

Want to read more about Dempsey's books and research into Michigan's conservation history? Check out our page about him here.