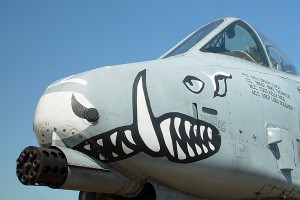 A few links of interest and mirth for our weekend sendoff.

Retired military brass stormed Michigan Tuesday, telling state policy makers that climate change is the biggest threat to U.S. security. It must be tough for the "it's impossible, can't be done" crowd, since it's hard to pigeonhole these warriors as sissy tree huggers. So the "antis" stuck to scoffing at President Obama's reference to algae as a promising biofuel. Ooops, again, the warriors are convinced about the value of biofuels. The Blue Angels have already used a 50/50 biofuel mix, and a number of jet models have been certified to use the renewable blend including the iconic A-10 "warthog" tank buster.

Kudos to General Motors, by the way, for pulling their funding from the Heartland Institute and its deceptive efforts to muddy the truth about climate.

Also of national energy interest, an Associated Press analysis published last week showed zero correlation between domestic oil production and gas prices. More drilling here and drilling now, it seems, makes imperceptible ripples in the ocean that is the international oil market. Designing strategies to use less may be our best option. Hey, didn't the military brass just tell us that?

Closer to home, did you know that an Eaton Rapids company can machine wind turbine hubs eight times faster than any factory in China? Cool. Keeping that momentum going is the goal of the 25x25 renewable energy campaign that you'll vote on in November if all goes smoothly.

Up in Port Huron, the Times Herald nailed it with their editorial on the proposed yard waste ban reversal. It would "help landfills and kick compost businesses to the curb" the Times-Herald concluded. Amen.

And across the state, morel mushrooms are making an early appearance due to the bizarre warm weather. Of course, weather is not climate, which you'd know if you paid attention to last week's excellent analysis by MEC's Brad Garmon.

Have a fun and safe weekend.we'll talk next week.