Denby: A Detroit neighborhood by and for the people

As the bright March sunlight hinted at warmer days, Sandra Turner-Handy took a walk around her block to hand out yard signs.

Turner-Handy lives in Denby, a neighborhood in east Detroit with a few thousand residents, hundreds of quaint brick homes, an Art Deco high school and a $1.5 million park.

It was at this park, Skinner Park, the Detroit Tigers stopped at during their pre-Opening Day tour, an event those yard signs promoted. Despite the rain, families from Denby and nearby Yorkshire Woods came to meet the Tigers, jam to a drumline, chow down and get baseball equipment.

Turner-Handy — engagement director for the Michigan Environmental Council and leader of the Denby Neighborhood Alliance — was thrilled, and not just because she’s an avid Tigers fan. The club chose Skinner Park out of 308 official Detroit parks. It was symbolic, proof Skinner was a focal point for the community.

It was just what a group of high schoolers hoped for when they envisioned, planned, gathered input on and raised funds for Skinner Park from 2013 to 2016. Since then, new iterations of Denby High School students have made their community for the better in ways few top-down approaches arguably could.

Students have democratically envisioned and designed a community environment made for them and their neighbors, one that is safe and provides the amenities they want. Because of it, graduation rates have gone up, the foreclosure rate has gone down, routes to school are safer and there are more opportunities to learn, grow and have fun.

“We felt we needed to encourage people of a reemergence of population into the community,” said Turner-Handy, who has guided the students in community projects through a Kresge Foundation grant given to MEC. “Our idea was to get people to turn down the blocks and see these beautiful brick homes and become a resident of the community.”

It all began with a school assignment.

The assignment was grounded in Detroit Future City, a 50-year strategic framework created by city leadership, experts and Detroit residents. Turner-Handy was among the leaders of its cohort of resident leaders, which is now called the Impact Detroit Network.

Impact Detroit wanted to find a pilot program for implementing the goals, ethics and planning framework of Detroit Future City at a local level. Turner-Handy jumped at the opportunity and convinced Impact Detroit to use her local high school as a pilot. 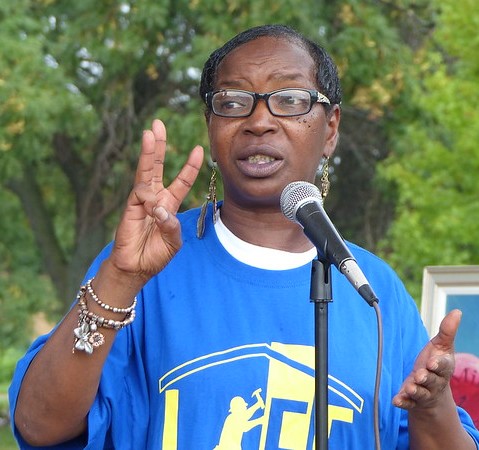 Turner-Handy and teachers then incorporated Detroit Future City’s framework into the Denby High School senior capstone project. Out of it sprung two crucial components to this story: the students’ strong need and want to invest in their community and the Denby Neighborhood Alliance.

The senior capstone challenged students to combine their academic rigors with community development and activism. Students were tasked with identifying a barrier in their community, researching solutions to it, presenting those solutions, and defending them.

A group of students, teachers and Denby residents bent on making their community better would then choose a senior capstone to make reality. Their name: the Denby Neighborhood Alliance.

During the 2013-2014 school year, the Skinner Park project was chosen. It was seen as a way to break down two barriers: a lack of fun, nearby greenspace for Denby residents and a lack of safe routes to school due to cars, blight and crime.

The target: The six-acre field next to Denby High School, home only to two football posts.

With Turner-Handy as their guide, students got to work making the park a reality.

They knocked doors and talked with residents about their own park visions. (They added horseshoes for older neighbors and centralized park amenities to minimize street violence spillover because of it.)

They used their academics. English skills were used to research solutions and make pitches to prospective funders and volunteers, and math was used to fit their park design to scale.

Students then used their activism to catch the eye of many Denby residents, metro Detroiters and Life Remodeled, the nonprofit that would help them secure $1.5 million in funding and some 10,000 volunteers.

Both park creation and neighborhood renovation achieved the students’ goals: give the community a green place to have fun in and make their community safer for children, especially to and from school.

Both park creation and neighborhood renovation cleared away blight and barrenness, inviting more people outside and making it safer to get from one place to another by foot, bike or board.

It kept and drew people to the community, too. Hakeem Weatherspoon and Joseph Middlebrooks were original members of the Skinner Park project. Now, the Denby High School 2014 grads are leaders of the project. Their journey back is just one of many.

So what does this all have to do with environmentalism?

“The built environment has just as much impact on health and safety as a contaminated natural environment,” Turner-Handy said. “In teaching sustainability and improving the physical nature of the community, we are improving the wellbeing of residents.”

After Skinner Park’s success, the Kresge Foundation began graciously funding Turner-Handy’s leadership position at the Denby Neighborhood Alliance through a grant given to MEC.

The following projects have been completed, are underway or will be soon. All fall back to those initial visions the DHS Class of 2014 had: a safer, funner, healthier community environment built by and for its members.

Powering each current and future project are Turner-Handy, students, Denby residents and Impact Detroit with financial support from the Kresge Foundation and the City of Detroit’s Neighborhood Strategic Fund.

As Skinner Park grew in popularity, students heard younger children complain that the “big kids” were taking over its basketball courts.

The park not only offers a fun greenspace and expanded safe routes to school, it offers a history lesson. It honors Detroiters doing good work, like community activists and first responders.

Chief among them: Beulah Cain Brewer, the first Black principal of Detroit Public Schools  — an especially fitting nod as the park was built on former school grounds.

Most folks enter the Denby neighborhood via Whittier Avenue, home to both local business and blight.

“We have beautiful homes in our community, but our business corridor? We have a whole lot of concerns,” said Turner-Handy. “No one’s ever gonna turn down the sidestreet if the business corridor does not reflect some vibrancy.”

Artists and designers create inspirational murals on business facades. Denby’s past and present youth keep the corridor’s grass cut tight with the equipment from a tool share garage. An engagement team helps businesses get uniform painting, awnings and signage. A youth-led technical team maintains a website for the ongoing work. Volunteers from a partner group, Camp Restore Detroit, and residents will come together in June to build flower boxes and benches.

And each group has a youth leader on its team.

Students realized many classmates not college-bound need help finding and training for a solid job. They also realized some families need help making payments on their homes and utilities. So, they created a solution to both barriers.

Soon, the Denby Neighborhood Alliance will maintain an apprenticeship program for both students and adult Denby residents who, with the help of a local construction union and university architecture college, will design and renovate abandoned homes. Then, those homes and others currently occupied will be outfitted with energy-efficient upgrades.

Adults who join the program as apprentices or volunteers will have first dibs on vacant houses. A nonprofit will maintain ownership while the new homeowners receive financial literacy training. Then, the adults get the deed.

While the physically smallest of the projects, this one runs deep. It sprung from Denby High School’s first successful community project under the Denby Neighborhood Alliance.

A rundown, vacant apartment building across from the school made children nervous going to and from school. The Denby Neighborhood Alliance told highschoolers they had the power to get the structure knocked down. Students reached out to the city government, and when they returned back from spring break, they were blown away to see the structure gone.

Now, students hope to create a public botanical garden from the building’s ashes, a place for science students to study plants and a  space of peace and serenity for residents and youth. 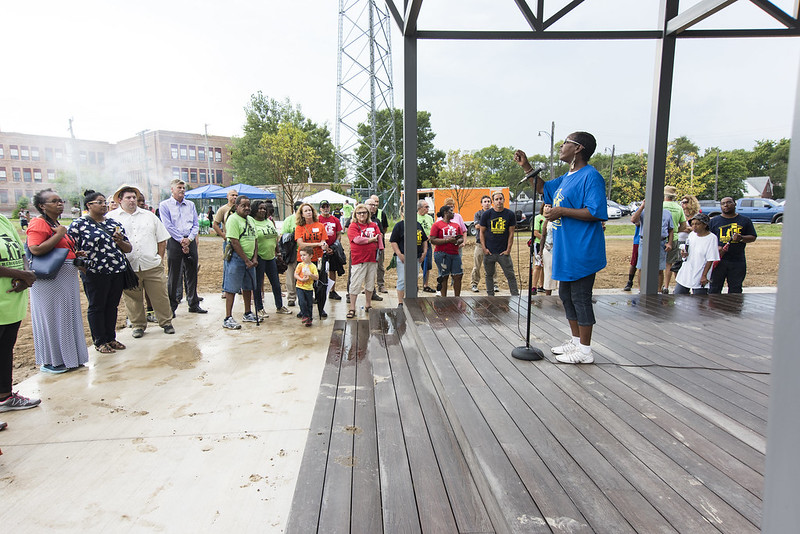 Photo 1 courtesy of the Detroit Tigers