A measured victory for the Au Sable 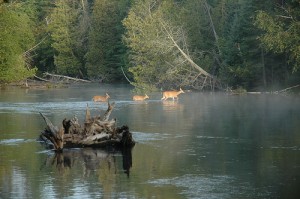 A pristine stretch of Michigan's Au Sable River will keep its scenic character and is safer from pollution caused by oil and gas drilling, thanks to a decision last week from the Department of Natural Resources.

You can read MEC's statement applauding the decision here.

As we wrote here previously, several parcels along the river's "Holy Waters" stretch were leased to the Canadian energy company Encana in an October auction. Some of the land was designated for development, meaning Encana could put surface wells, storage tanks and heavy equipment right alongside the revered fly-fishing waters that gave rise to Trout Unlimited.

The Anglers of the Au Sable, an MEC member group, flagged the threat of oil and gas development along the river and enlisted members of the public to urge DNR Director Keith Creagh not to authorize the leases. MEC and other allies joined that effort.

The decision from DNR Director Keith Creagh means no surface drilling will be allowed in the river corridor, but it's important to note that oil and gas beneath the leased parcels can still be accessed horizontally from wells drilled elsewhere. So, the river is better protected from the sights, sounds and smells of industrial activity and the threat of pollution from spilled or leaked fracking fluids. But there are still real threats to the groundwater resources that feed the Au Sable and provide its steady flow.

We look forward to continuing to work with the DNR and our allies to put in place the strongest possible protections for the Au Sable and freshwater resources throughout Michigan.