A century ago, the landscape was changed, too. It was thoroughly logged, from the rivers' starts near Harrison's Grayling area home to their respective ends in Lakes Huron and Michigan.

Harrison likened the rivers’ progress since the early 1900s to a tree. The rivers were seedlings of what they once were. Now, they are saplings growing toward full maturity.

“We’re just getting back,” said Harrison. “We have shade in the river, and some of the damage from logging is disappearing. I just hope it keeps getting better. I just want to see [the river] remain wild and scenic and taken care of.”

Harrison may deny it, but she has been instrumental in nurturing that sapling of a river landscape, and her work now will let our future generations enjoy it.

For eight years and counting, she has led major, successful watershed restoration efforts as the president of Michigan Trout Unlimited's Mason-Griffiths Founders Chapter. She has created project plans, directed them and gotten her hands dirty in the process. She has fundraised about a million dollars for the rivers and their watersheds. And she has connected with community groups, local governments and residents to make life along the river better. She has done all this without pay.

For her outstanding grassroots leadership, commitment, creativity and courage, Harrison was nominated for the Michigan Environmental Council’s Petoskey Prize by the Mason-Griffith Founders Chapter of member group Michigan Trout Unlimited. She will accept the premiere environmental award and a $5,000 check for her chapter at the 23rd Annual Environmental Awards Celebration on Aug. 19.

Harrison has lived in Grayling for 15 years, and it was her love of science and rural life that brought her there.

She spent three years trekking Northern Michigan before she found the right place. Along the way, she stayed at the Gates Au Sable Lodge and met owner Rusty Gates, the 2009 Petoskey Prize recipient. They became good friends – some Lodge employees even helped Harrison move in.

Gates was a “master” at getting people to do good work, Harrison said, and she soon found herself volunteering with Gates’ group, Anglers of the Au Sable.

“Rusty Gates was my inroad to doing conservation work,” she said.

With her science background and her river passion, Harrison rose in rankings and fell deeper into the Anglers’ work. She became a board member for seven years, where she honed what is now her jack-of-all-trades expertise, leading communications, education, habitat and event planning efforts.

She concurrently began volunteering with the Mason-Griffith Founders Chapter of Michigan Trout Unlimited, where she quickly took on a position she still holds today: president.

It was a daunting role, said Bob Andrus, the 2013 Petoskey Prize recipient. It required a full-time, voluntary commitment at a pivotal moment in the chapter's history.

The Mason-Griffith Founders Chapter was the birthplace of the national Trout Unlimited organization. Harrison helped make it a proud owner of that title, said Bryan Burroughs, executive director of Michigan Trout Unlimited and an Environmental Council board member. Harrison expanded its membership and helped the chapter change its core mission. Before, it raised money for other groups and people. With Harrison's help, it raised funds for its own watershed protection and enhancement projects, which it largely secured through numerous grants that Harrison wrote.

Now, Mason-Griffith is one of the most active and successful among the 387 chapters across the nation. 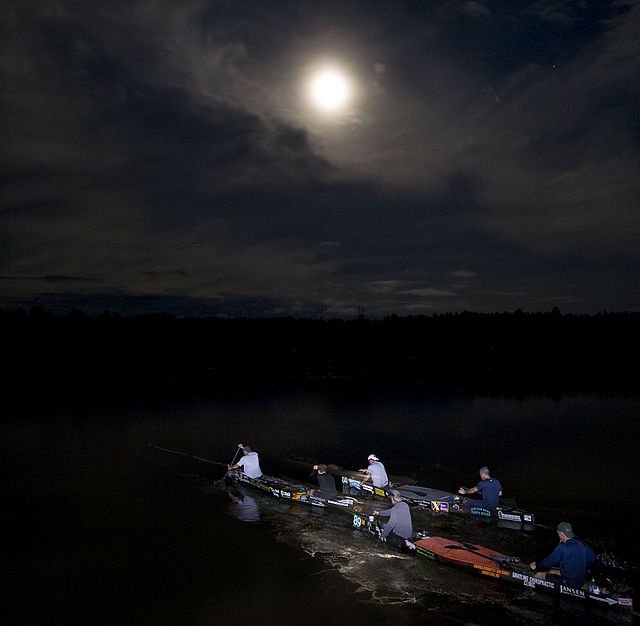 Augmenting her leadership roles were partnerships. The communities along the headwaters of the Au Sable and Upper Manistee are small, close-knit and partially dependent on the tourism the rivers bring. Not only are the rivers considered scenic, they are largely regarded as the best trout fisheries this side of the Rocky Mountains.

"It would be rare not to see Karen at any of the [Mason-Griffith] Chapter’s dozens of volunteer events held each year, whether it is an adult or middle school fly-tying class, trout-in-the-classroom events, an insect survey, a cedar tree planting or stream access improvement," said Andrus.

Harrison helped forge bonds with multiple groups to maximize the benefits they gave to the Upper Manistee and Au Sable watersheds – Frederic Township, Friends of the Mason Tract, the Au Sable River Watershed Committee; the list goes on.

So, too, does the list of successful grant projects, habitat improvements, river restorations, educational opportunities and community events she led.

Even those that know Harrison may not know the impact she has had on the rivers, their watersheds and their communities. That, said Burroughs, is the "magic" of her.

"She just keeps all focus on the work at hand and how our natural resources will be better if we keep doing more and more," said Burroughs. "It’s all about the work, the benefits to our watersheds, our fish and the people who take part in it."

Through Harrison’s drive, expertise and quiet, kind leadership, the Au Sable and Upper Manistee Rivers – once epicenters of Michigan’s destructive logging past – are now shaded by aging trees and flowing with few impediments. Native fish and aquatic plants are coming back. Communities are benefitting from the rustic recreation, sylvan sights and angling opportunities. And both rivers are protected from excessive development with a Natural designation by the Michigan Department of Natural Resources.

Protecting the Au Sable and Upper Manistee rivers for future generations aside, Harrison has found the reaction of her neighbors to be especially rewarding when it comes to her work. These residents may not know the river well, but they tell her they can see how much healthier the rivers are.

But protecting the Au Sable and Upper Manistee rivers will always be at the core of Harrison's work, not recognition. Her current project is a perfect culmination of what the Mason-Griffith Founders Chapter represents: habitat protection, education and community. The Chapter is working with local governments to restore a one-mile span of the Au Sable riverfront. Nearby hospital, elementary school and parks put this portion of the river in close contact with the Grayling community.

Harrison sees it as a perfect opportunity to bring residents to the river. Not only will fish habitat be restored, but a family-friendly viewing and fishing area will be installed so people can become immersed in the views and recreational opportunities the river offers.

The project is also a prime opportunity for people who like the river to get involved.

It can be daunting to volunteer, especially at an organization like Michigan Trout Unlimited, where the association works in the water, taking samples and mucking it up.

Harrison had this to say: Do not fear.

“The worst thing that somebody can say is, ‘We don’t need your help.’ If an organization doesn’t need help, I want to find that one,” she said with a chuckle.

That help, she added, can be just about anything. It could be wading through a river, but it could also be organizing a garage sale fundraiser, filing paperwork, writing a newsletter or attending government meetings.

“One of things I found out is there’s hidden expertise out there,” Harrison said.

The Au Sable and Upper Manistee rivers certainly found that in Harrison.